Paradise Palm, a Mid-Century Modern neighborhood in center Las Vegas is located on The Las Vegas National Golf Course. It is bordered by Golden Arrow to the North, Viking to the South, Maryland Parkway to the West, and Eastern to the East. This subdivision of “futuristic” luxury housing, designed by the Palms Springs mid-mod architectural firm of Palmer &Krisel, was the first planned residential community in Las Vegas. Many people consider it as a neighborhood where all the Las Vegas icons of the 60s and 70s lived. 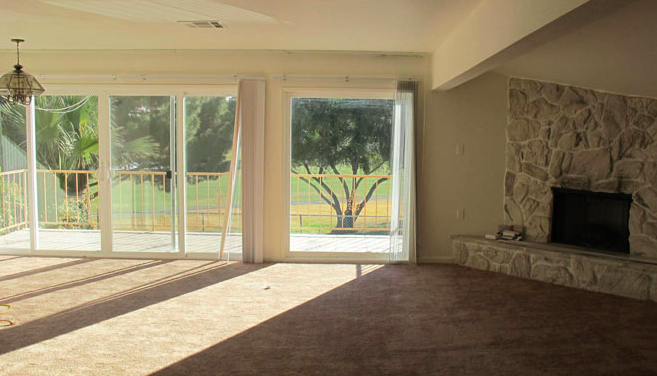 In the early 60’s Irwin Molasky’s Paradise Development developed Paradise Palms. Although the floor plans of the houses are essentially the same, the houses have different rooflines and are placed at different angles on the lots. Roof planes tend to be simple shed roofs, which offer plenty of daylight and view at the high side. The low profile on the opposite side maintains the privacy. They’re straightforward to frame, beautiful visually, and cost-effective. As a result, each home encompasses a custom look. This is accomplished while maintaining the basics of Mid-Century style, post-and-beam construction on slab foundations, stucco finishing, open floor plans, high windows and decorative block screens.

Many of the homes in Paradise Palms back up to the original Stardust Golf Club (now called The Las Vegas National Golf Course). The National Golf Course has a long history in the Las Vegas Valley. It has become a landmark over the last 50 years. In 1961, shortly after completion, the Stardust Country Club hosted its first professional golf event, the LPGA Championship. From that date forward history was made. During the 1960s, The National played host to some of the biggest names on the strip and around the world. The Rat Pack frequently played golf and spent many days and evenings in the clubhouse bar. Many nights would feature Dean Martin, Frank Sinatra, Peter Lawford, Joey Bishop and Sammy DavisJr., the piano while entertaining their guests with songs and stories. Locals still tell tales about late night matches under the glimmer of the driving range lights. Fittingly, the new restaurant in the clubhouse has paid homage to the gentlemen and named the bar and grill, “The Rat Pack”. Paradise Palms was also host to the movie “Casino,” starring Robert DeNiro, Sharon Stone, and Joe Pesci. Former Las Vegas Mayor Oscar Goodman also had a cameo role. The house used in the movie sits off to the left of the #1 Tee Box between the #1 and #18 fairways.

Although Las Vegas is known for demolishing its history and iconic buildings to make room for the next “it” venue, homebuyers are now looking for that little piece of history. In the 80’s, as Las Vegas grew rapidly, residents began moving to the newer track homes, making Paradise Palms homes a popular rent destination. Until recently, the center of Las Vegas was thought of as a less than desirable place to reside. However, there has been a recent surge of interest in mid-century modern housing and people are moving back to the heart of Las Vegas maintaining the original status quo.

Within the past couple of years, residents of Paradise Palms have teamed together to develop an official Paradise Palms neighborhood pride zone, a neighborhood watch and organized annual neighborhood clean up days. Fire hydrants and street markings are getting a fresh coat of paint, graffiti is being painted, weeds are being pulled and most importantly the community has grown into a family. 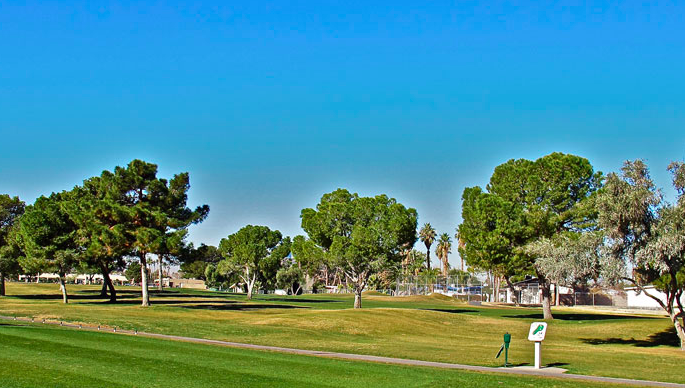 Every month Paradise Palms hosts two mixers events. They use the mixer as an opportunity to discuss ideas and plans for the future and to get to know neighbors — both old and new. One mixer is hosted at a different house every month, and the events have become so popular that they are already booked until middle of 2014! The other monthly social is held at The National Golf Course Club House. Las Vegas National provides the group with cheap drinks, free food, and free golf lessons. In addition, they have been working with Paradise Palms residents on beautifying the neighborhood and keeping it safe.

Currently, there are fifteen homes available for sale ranging between $160,000 for a Desert Modern home that may need some updating, and up to $500,000 for an immaculate vintage golf course homes with a large lot and massive pool. North of Desert Inn Road, the homes are typically smaller and cheaper, as the busy road stands between that section of the neighborhood and the green expanses of the golf course.

As for the rental market, you can expect to pay as low as $1,000/month for a three bedroom on the North side of Desert Inn, and as much as $2,200 for a golf course property that has upwards of five bedrooms and a pool.

The residents of Paradise Palms have taken progressive steps together in the name of their community, and are the foundations pulling this development in the right direction. Original mid-century style is being highlighted, retro paint color schemes are returning and decorative brick walls are being rebuilt. On the community Facebook page, resident Tim Olsen said, “Our community shares things and has things in common that matter to us. We work for the betterment of all and enjoy each other’s company. We have respect for individual differences. I believe humans do better in a community, both physically and mentally. My house has a doorbell on the front door AND the back door, which tells me that at one point people would come over the golf course and ring the bell. I love that!” Now that’s a community I’d want to live in.

This content is not the product of the National Association of REALTORS®, and may not reflect NAR's viewpoint or position on these topics and NAR does not verify the accuracy of the content.

Find your next home